Public Discourse in the U.S. 2020 Election: January and February

The decisions voters will make at the ballot box on November 3, 2020 will be influenced in no small part by the media coverage of the candidates and issues, including the reporting by journalists, the media personalities and pundits on radio and television, text messages and campaign phone calls, podcasts, political ads, and for many, the incessant flow of social media posts of friends and family. In this report, the first of a series of reports that cover the months running up to the November election, we track political discourse in the United States for January and February of 2020, the period of time just before (Covid-19) began to dominate political discourse. We also describe the longer-term structure of political media ecosystems in the United States that shape public discourse by curating, amplifying, and propagating political stories and narratives to distinct political audiences.

The agenda of political media in January and February 2020 centered on the impeachment of the president, the Democratic primaries, and the killing of Qasem Soleimani. This agenda was picked up throughout the media ecosystem, but there were stark differences across the media camps in the framing and narrative contours applied to these topics, presenting radically different depictions of the underlying evidence, facts, and interpretation of events. These differences between media spheres that often extend beyond spin and emphasis reflect and reinforce the depth and strength of the divide in American politics.

Mainstream media described in great detail the rationale for impeaching the president, while in right-wing media the ‘call was perfect’ and the impetus for impeachment was a concocted charade, a witch hunt, to illegitimately overturn the 2016 election. Mainstream media described a rash decision by President Trump to order a missile strike on General Soleimani that was then sold to the American public on the false pretenses of a clear and imminent threat of attack against United States embassies. Conservative media hailed the killing as a decisive strike against adversaries that has unquestionably increased American security and standing in the world.

While mainstream media coverage devoted similar levels of attention to the Democratic primaries and the impeachment of the president in January, and a majority of their attention to the primary race in February, politically engaged users on social media were more focused on partisan one-upmanship. For Democrats, attention was directed at the impeachment and the missteps of Trump and his administration, and in February, the intervention of Attorney General Barr and the Department of Justice in the sentencing of Roger Stone. Republicans, in turn, focused their attention on time-honored political foes: Nancy Pelosi and the Democratic leadership, Hillary Clinton, and the hostile and biased mainstream media. The patterns of attention on both sides are consistent with a view that negative partisanship plays a dominant role in American politics. Trump supporters on Facebook provided an exception to the pattern of negative coverage where celebratory videos of appearances and events of Trump were popular.

Negative polarization spilled over into the Democratic primary race, which came down to a battle between progressives pursuing a platform of aggressive action on healthcare, climate change, and social and economic justice versus those that put regaining the White House above all else and saw a moderate candidate as a better bet. The media coverage promoted by Sanders supporters placed major focus on the candidate and his policy positions. In contrast, Biden supporters were oriented towards negative coverage of Trump. The outcome of the Democratic race is in keeping with the tenet that negative partisanship dominates American politics.

Conservatives in America appear to have survived the barrage of negative coverage from mainstream media with their partisan perspectives and belief systems intact. This is not because conservative media erected an impermeable barrier against negative coverage from the center and left. Politically engaged conservatives were informed of the damaging coverage, but were unfailingly offered a reinterpretation and reframing of events and a plausible alternative narrative designed to preempt any second thoughts about allegiance to party and president. In deflecting and reframing negative coverage, the tactics employed by conservative media follow a well-developed pattern: downplay the validity of the story; deflect attention to the other side; attack the integrity and motives of sources; reinforce distrust in media outside of the right wing; and invoke a strong partisan framing to activate political identity.

The formidable narrative crafting power of conservative media is employed not as a mechanism for accountability among its participants and leaders and not to police against disinformation and substandard reporting. Instead, it is wielded as a buffer against external influence and against deviance from the party line. This leaves the system vulnerable to misleading and false reporting and to those propagating conspiracies, such as the Gateway Pundit and True Pundit. Hyperpartisan media sources, which thrive on outrage and frequently misinform their audiences, play a prominent role in conservative media. On the left, partisan and hyperpartisan outlets play a much smaller role and less frequently propagate stories unconfirmed by mainstream media.

The biggest change we observe in these first two months of 2020 compared to the election cycle of four years ago is the degree to which conservative media activists have shaped mainstream media coverage. In 2016, right-wing media activists succeeded in influencing mainstream coverage of Hillary Clinton, particularly on the unsubstantiated allegations of wrongdoing associated with the Clinton Foundation, which exacerbated and fed upon coverage of her emails and fueled suspicions of corruption and dishonesty. In the current election cycle, conservative media activists rolled out the same playbook that was so successful in 2016. This time, the corruption allegations were focused on Joe Biden, his son Hunter, and their dealings with Ukraine and China. This story was picked up by mainstream media in 2019, but the core allegation—that Joe Biden pressured Ukraine to remove a prosecutor in order to protect his son—fell apart under scrutiny. By January 2020, while conservative media continued to push out exaggerated and false claims, the dominant mainstream framing of this story had shifted to Donald Trump’s abuse of his presidential power for his own political gain, which overshadowed the well-established and misguided actions of Hunter Biden to cash in on his father’s name. The discredited allegations of corrupt dealings by Joe Biden were getting no play in mainstream media. While conservative media continues to exhibit a remarkable capacity for reframing news coverage to align with the beliefs and perceptions of its core audiences, in January and February of 2020, its power to shape mainstream media coverage was diminished compared to 2016. This is the most notable change we observe and has the potential to alter the electoral calculus in the November election. 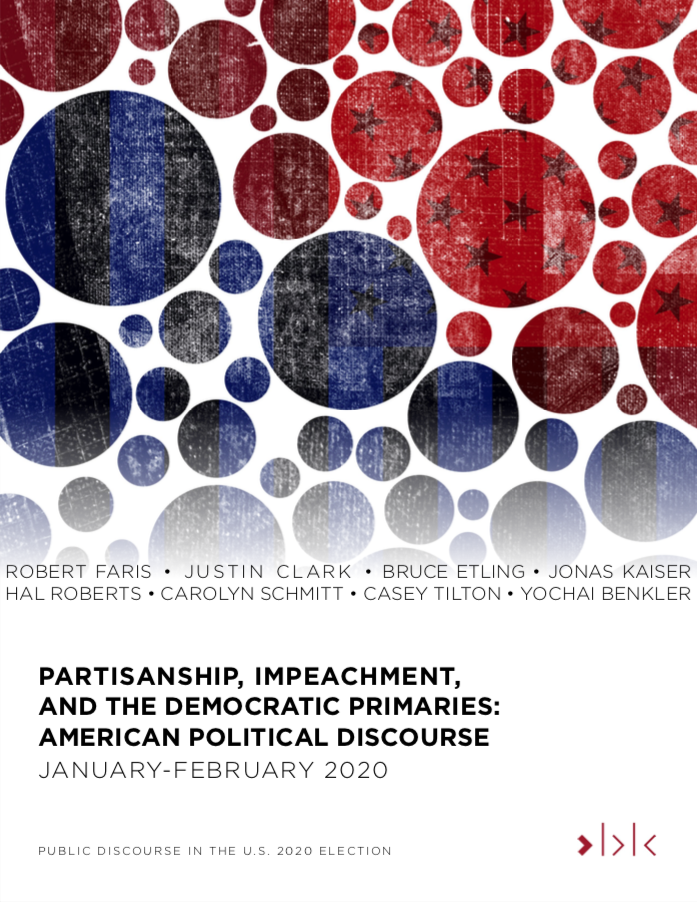