By the middle of March, the Democratic primary had effectively ended and the enormity of the Covid-19 pandemic and its human and economic cost began to sink in. The response to the pandemic had already been thoroughly politicized several weeks earlier such that news and information about the pandemic were mediated by political media systems. While the rest of the American media ecosystem focused on describing the pandemic, its economic costs, and criticizing the president for his response, conservative media presented a thoroughly partisan view of events and proactively defended and supported the actions and inactions of the president. For audiences of conservative media, information about the pandemic was communicated not through politically neutral public health authorities but was instead filtered and propagated through media channels shaped by many decades of partisan politics. The mainstream media coverage of the pandemic that got the most attention was highly critical of the president’s response, which may have deepened the politically-rooted differences in perspectives on the pandemic. Compared to conservative media, there was far greater deference among media sources on the center and left to views and perspectives of public health authorities and experts.

This report, based on an ecosystem-wide analysis of political media coverage, spans the period of March, April, and May, when the spread and magnitude of the pandemic in the United States became clear, and the response of the government was communicated to the public and debated in the media. In March, coverage of the pandemic dominated political media on both sides of the political spectrum, though significantly less so on the right. The proportion of media attention to the pandemic diminished in April and May on the left. On the right, attention to the pandemic dropped off steeply. In April, conservative media and their audiences devoted substantial attention to coverage of the allegations of sexual harassment by Tara Reade against Joe Biden. In May, there was far more attention in conservative media to relitigating the origins of the Russia investigation under the banner of Obamagate than to the pandemic, which had already exacted a terrible cost and was nowhere near being under control. The collective judgment of the conservative media ecosystem was that this largely unsubstantiated storyline rooted in grievance politics was more deserving of the attention of the American public. For Biden supporters, the drop in attention to Covid-19 was picked up by negative coverage of the Trump administration on other issues. Sanders supporters followed a similar path until the death of George Floyd at the end May took up their attention. This was not replicated in the Biden set. Consistent with our findings in January-February, at the peak of the primaries season, Sanders supporters here too appear more focused on progressive issues, while Biden supporters are largely focused on criticism or rejection of Trump.

Neither President Trump nor conservative media have lost their ability to influence the media agenda. For example, in a recent report we describe how Trump was able to create a controversy about mail-in voter fraud that prompted media coverage across the political spectrum. The sexual harassment allegations lodged by Tara Reade against Joe Biden ultimately got a public airing—something conservative media pushed hard on. Despite the fact that the impetus to address this topic came also from the left, the media attention garnered in conservative media was not matched in the center and left. The key difference is that while President Trump and conservative media can still make news, their power to interpret and frame the narrative around key events beyond conservative media is more constrained than in 2016. The asymmetric credibility gap between conservative media and the rest of the media ecosystem appears to have deepened. And professional media seem to succumb less readily to the “bias of balance” problem that had bedeviled much of mainstream coverage of Hillary Clinton’s campaign in 2016.

There is plentiful evidence of in political discourse among partisan media and on social media. The problem is far more acute on the right than the left and considerable attention on the far right is tied to the growing QAnon conspiracy. This development is a troubling symptom of the state of political discourse in the United States and translates into real-world costs. However, the impact of top-down propaganda and disinformation is still a greater problem in the United States, particularly so in relation to Covid-19, as tens of millions of Americans have taken unnecessary risks and helped spread the pandemic because they were misinformed about the dangers of contracting the disease and the value of measures deemed effective by public health authorities in reducing the chance of infection, such as social distancing or mask wearing.

Many people, including public health specialists and the general public, have come to the conclusion that compared to the relative successes of other countries in addressing the Covid-19 pandemic, the United States response has been a failure, costing innumerable lives and leaving tens of thousands with long-term health problems, while deepening and extending the economic and social consequences of the pandemic. A large minority of Americans fundamentally disagree with this assessment. These divergent worldviews, the symptom of a larger epistemic crisis in the United States tied to asymmetrically polarized media systems, greatly complicate efforts to effectively meet such collection action challenges, and undermine democratic governance. In this paper, we describe how American media ecosystems are able to sustain such different worldviews and contribute to the mishandling and miscommunication of the pandemic. This report is the second in a series of reports that cover the months running up to the November election. 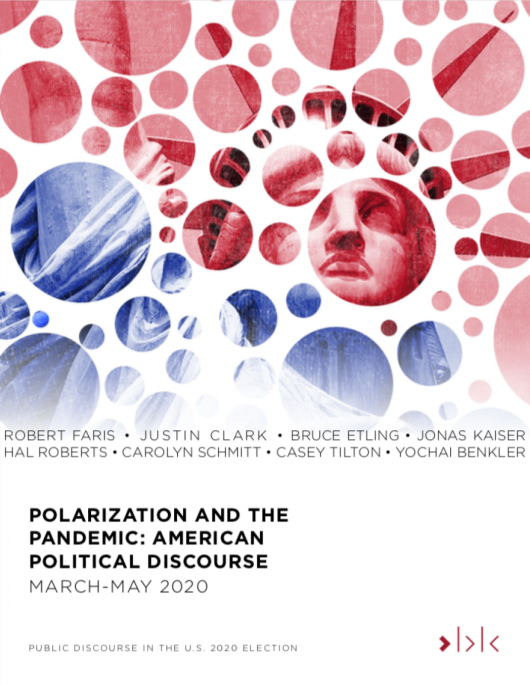